Welcome to a three part lunch seminar series on the Environmental and Climate Humanities this spring 2023, starting February 9!

How: We open the doors at 12.00 for mingle and bring your own lunch, the seminar starts 12.15 with a presentation by the invited speaker followed by discussion 12.45, and we end 13.00 sharp. 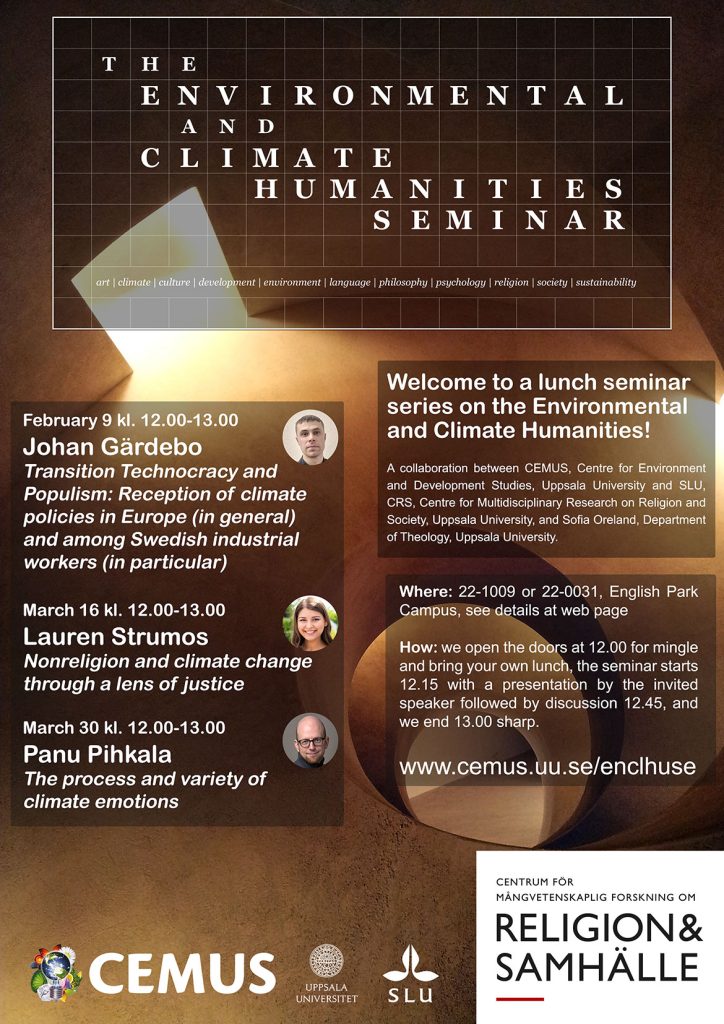 Johan Gärdebo Transition Technocracy and Populism: Reception of climate policies in Europe (in general) and among Swedish industrial workers (in particular) 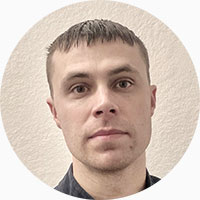 Since the Paris Agreement 2015, “just transition” have central to attempts, and hopes, to bridge a jobs. vs. climate-divide as part of decarbonising industrial society. But what are the imperatives for a just transition of the workforce? And what are the nationally defined development priorities for the creation of decent work and quality jobs? Through interviews with Swedish trade union representatives from Sweden’s three largest industrial emitters (steel, petroleum refining, cement) along with representatives at the central level, this study illustrates contrasting interpretations of what constitutes a just transition.

The main tensions concern the time a climate transition is allowed to take; if policies should support local inhabitants or global concerns over climate change. These matters have become increasingly critical given the many revolts by industrial workers, transport personnel, and farmers, across Europe. In this presentation, Gärdebo describe some of the differing receptions to climate transition policies based on case studies among Swedish workers. The larger aim of the presentation is to situate receptions of climate policies in a larger discussion about attempts to govern Western societies technocratically.

Bio
Johan Gärdebo is a historian studying climate knowledge and decarbonisation policies as these interplay in local, national, and transnational settings. He is currently conducting research projects detailing Sweden’s historical contributions to climate knowledge during the 1900s, as well as conflicts surrounding contemporary climate transitions policies, focusing in particular on industrial towns and previous industrial transitions.

Lauren Strumos Nonreligion and climate change through a lens of justice 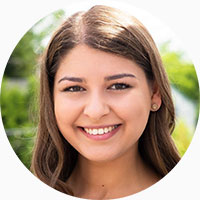 In traditionally Christian countries like Canada the number of people who do not identify as religious in increasing. At the same time, there is a growing awareness of anthropogenic climate change and ecological destruction. This seminar will present climate justice as a framework to better understand intersections between nonreligion and ecology. How do the nonreligious conceptualize their place in a world experiencing planetary crisis? What are the various ways they construct moral relationships with other terrestrials, human and non-human? Empirical data for this seminar is drawn from interviews conducted with settler activists, both nonreligious and religious, opposed to an oil pipeline project in British Columbia, Canada.

Bio
Lauren Strumos is a doctoral candidate in Religious Studies at the University of Ottawa (Canada). Her research explores how settler activists conceptualize their opposition to an oil pipeline project in the province of British Columbia, Canada. Her other research interests include veganism and human/non-human animal relations. Lauren is a deputy editor of Nonreligion and Secularity, the blog of the Nonreligion and Secularity Research Network, and she was an Ian H. Stewart Graduate Fellow (2021–2022) at the Centre for Studies in Religion and Society at the University of Victoria (Canada). Lauren received a Mitacs Globalink Research Award to visit the Centre for Multidisciplinary Research on Religion and Society at Uppsala University from January to April 2023.

Panu Pihkala The process and variety of climate emotions 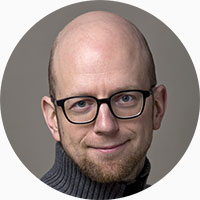 Experienced eco-emotion researcher and “eco-theologian” Panu Pihkala from University of Helsinki will discuss important climate emotions and ways of encountering them constructively. The major framework is his recent research article “The Process of Eco-Anxiety and Ecological Grief”, freely available at https://www.mdpi.com/2071-1050/14/24/16628. What is commonly called “climate anxiety” consists of many things, including various grief reactions, but fundamentally it is an adaptive response in the sense of being in touch with the reality of the climate crisis. The wide range of possible climate emotions is discussed in Pihkala’s other research article from last year, Toward a Taxonomy of Climate Emotions, https://www.frontiersin.org/articles/10.3389/fclim.2021.738154/full.

Bio
Dr. Panu Pihkala (b. 1979, he/his) is an adjunct professor of environmental theology (Title of Docent) at the University of Helsinki and a researcher in HELSUS Sustainability Science Institute. He is currently known as a leading expert in interdisciplinary eco-anxiety research. Pihkala has published two books about eco-emotions in Finnish, along with many books about eco-theology. Publications: https://scholar.google.com/citations?user=wwPxvoMAAAAJ&hl=en