Can we redirect the world of business to be driven by a social or environmental mission rather than a for-profit model? What role can social entrepreneurship play in realising the Sustainable Development agenda?

This February CEMUS is proud to host an open lecture series on Social Entrepreneurship. Over two weeks we will welcome two diverse and engaging speakers to share their experiences in the world of sustainability and starts ups. 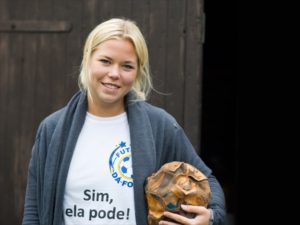 1. Football as a Catalyst for Development with Cecilia Andrén Nyström
Futebol dá força
When : Wednesday 15th February 10:15-12
Where : Hamburgsalen, Geocentrum

On Wednesday 15th February we will be visited by Cecilia Andrén Nyström. Cecilia founded Futebol dá força in 2012 in Mozambique, and has since then led the organisation with a team of twenty people. Today she runs Futebol dá força with 6000 active girls trained by almost 400 voluntary coaches throughout Finland, Mozambique, Sweden and Zambia!

Cecilia is a recognized entrepreneur and speaker, despite her young age, and she has talked at everything from universities to multinational companies. She is regarded as one of Sweden’s future leaders and has been awarded several prizes and awards for her work, including Women Shape the World Award 2016 and Young Entrepreneur of the Year 2014. Her lecture for a CEMUS course last year was so popular that she returns to speak to an open audience about Football as a Catalyst for Development.

On Monday 22nd February we will be visited by Shawn Westcott. Shawn Westcott is happy to return to Uppsala for the 6th year in a row to speak on the subject of “The Impact Economy: When Business Serves People”. Shawn is the Nordic Director for BlueOrchard Asset Management, one of the world’s leading impact investing fund managers. He previously initiated and Co-founded Impact Invest Scandinavia, the first impact investing network in the Nordic region. He was also the former Chairman of Social Entrepreneurship Forum, a Swedish-based non-profit promoting social enterprise, during which time he initiated and spearheaded the development of the first business Incubator for social entrepreneurs in developing countries, in partnership with Sweden’s international development agency, SIDA.

Originally from the US, Shawn moved to Sweden to study his Masters in Sustainability, and then taking a job as a sustainability adviser with the AtKisson Group. Shawn has a background as a US political strategist and campaign manager, beginning with Al Gore’s campaign for President, as well as a bunch of other odd jobs, including a bike messenger. Shawn was previously selected as one of the top 100 people to most affect the sustainability and CSR of companies in Sweden. He lives in Stockholm with wife and two boys.