The Liberation Struggle in Guinea-Bissau: between educational practice and experiences

Here comes the invitation to the third meeting this autumn of our integrated CSD-CEFO/NRHU Sustainability Seminar.

Participants in the seminar are cordially invited to lunch afterwards. Those who would like to join us for lunch, please notify in advance, at the latest Monday, Sept 28, 11 am: Lars.Rudebeck@csduppsala.uu.se

Presenter: Sónia Vaz Borges, MA in African History at the University of Lisbon; PhD Candidate, Institute for Education, Humboldt University, Berlin. Sónia is also the author of a recent book on life in immigrant neighbourhoods in Lisbon: Na Pó di Spéra (In the dust of hope), Principia, Lisbon, 2014.

Title of Presentation: The Liberation Struggle in Guinea-Bissau: between educational practice and experiences

An abstract of the research proposal follows below.

No discussant has been specifically appointed. But we count on all committed participants to join the discussion.

The seminar will be chaired by Lars Rudebeck, who has many-decades-long research connections with Guinea-Bissau.

The Liberation Struggle in Guinea-Bissau: between educational practice and experiences

Under normal circumstances education is a result of the environment and it is directly related with the society where it develops. It is considered an important tool for development and social-individual transformation. Studies about education in Africa tend to implicitly advance the idea that African education systems, following patterns of colonial education, are the result of the work of Europeans. Of course, this perspective neglects the specific contributions advanced by Africans while at the same time reproducing the idea of an African inferiority. Even in critical perspectives, the tendency to neglect the role local actors developed in the history of African education is present.

The liberation struggle movements in the time of decolonization offer good cases in point showing the contrary. These were mostly movements strongly influenced by leaders who had their own experiences in the colonial educational systems and then engaged in the fight for self-determination. In the simultaneous movement of criticizing colonial education and of attempting to reinvent modern educational institutions in order to advance the liberation struggle, a contradictory process of critique and re-assessment of modern European educational institutions took place.

A closer look at the experience of the decolonization struggle in Guinea-Bissau and Cape Verde could show the importance of cultural practices in achieving independence. The PAIGC (Partido Africano da Independência da Guiné e Cabo Verde/The African Party for the Independence of Guinea-Bissau and Cape Verde) and its leader Amílcar Cabral developed a strategy of expanding education in the liberated areas during the guerrilla war in Guinea-Bissau that also included cross border-ties to Senegal and Guinea-Conakry.

Departing from my previous exploratory studies – Amílcar Cabral: political and cultural strategies for the independence of Guinea Bissau and Cape Verde 1956-1973 (2009) – it became possible to analyze the importance of cultural and political practices for the independence of both countries. This research included field work and interviews in Guinea-Bissau, which allowed me access to documents on the educational project and program that PAIGC developed and put into practice during the guerilla war in Guinea-Bissau Liberated Areas and also in the neighbouring countries Guinea- Conakry and Senegal.

One of the freedom fighters I interviewed emphasized to me that the struggle required ”many strategies”. Taking this thought into account, I hope to investigate, among other things, if traces can be found of ”education for sustainable development” – long before the term and concept as such had been formalized – in the practices called for by the realities and experiences of autonomous development in the liberated areas.

Most importantly, with this presentation, it is my intention to unveil the educational experiences developed by PAIGC between 1956 and 1974, including the concept of ‘Militant Education’, as put into practice by the main actors of the process, namely the teachers and the students. 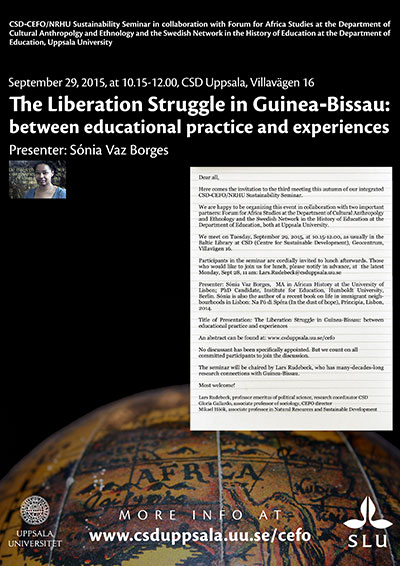