Dálkke is based at CEMFOR, Department of Theology at Uppsala University, and collaborates with Luleå University of Technology, Michigan State University and universities in Canada, US, Australia and Japan, as well as Indigenous communities and associations. The project forms part of ongoing efforts by Indigenous and allied scholars, knowledge keepers, scientists, change-makers, and leaders to create a field to support Indigenous peoples’ capacities to analyze and address the consequences as well as mitigate the impacts of anthropogenic climate change – thereby contributing to the establishment of the field Indigenous Climate Change Studies.

Read more about the project here

Within the project we analyze consequences of climate change, how different political actions within the energy sector claimed to mitigate climate change – such as wind power, nuclear power, hydropower, solar cells and in general the production of electricity – affects Indigenous communities already under hard pressure from colonization – and how animal, forest, lands and waters are affected. We analyze the technological design of energy production and raise questions about how the design and shape of energy technology systems relate to the goals for increased or reduced consumption in general.

There is a lot of talk of crisis and apocalypse, due to war, to climate change. Young people worried about their future go on school strike and manifest, around the world. But, when the climate or any other crisis happens, how are these young (and adult) protesters prepared to fend for themselves? How long can you survive without electricity and water in the tap, with access to food in the supermarket? Thinking about all of this, 16 year old Hampus Andersson decided to try to live off the lands and waters for a full month, on his own. If there is such a crisis, would he make it on his own? From mid July to mid August 2019, the experiment went on. He made sure to learn from more experienced and older reindeer herders and others with experience from the forests. Hampus is not completely unaware on how to get access to food in the forest. His father is a Sámi reindeer herder, and his mother’s family are an agriculture family. But until this day he had never done such an experiment. How would he find food, water, shelter? What would be the hardest? Some things that he had never even thought about turned out to be harder than expected.

During the stay Hampus documented his everyday life with photos and short films, and posted on his Facebook page and Instagram. This is a film made from those photos and videos, along with an interview by film maker Petri Storlöpare, Slowfilm AB. Hampus speaks of his experiences, thoughts and ideas on how to continue this experiment. Will he try the same in the Arctic winter, with temperatures down to minus 40 Celsius? 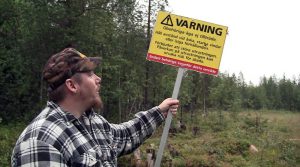 Henrik Andersson showing a sign that states he has no right to be on his own traditional Sámi lands – due to wind power testing. Photo: Petri Storlöpare, 2015.

Presentation of ongoing film project by and with Henrik Andersson, reindeer herder within the Gällivare Forest Sámi village and CEO of his own reindeer herding company. Forest Sámi reindeer herding culture has prospered here since at least the Iron Age. In view of climate change mitigation – what can Swedish state, the European Union (EU) and other state organisations as well as non-governmental organisations (NGOs) learn from the knowledges and understandings of the Sámi reindeer herders? The film forms part of a supradisciplinary research and documentary project on sustainable power production, researching and documenting the subject matter from Sámi reindeer herding point of view, along with analyses of the supposedly climate friendly power production technologies.

Currently the Swedish government, with a massive support from environmentalists – individuals as well as NGOs, pushes for a “fossil free Sweden” and strongly promote windpower – in Sámi territories. Hydropower exploitation in the 20th century took place in the very same territories and destroyed huge parts of Sámi culture and tradition. Within the EU climate action policy, states are asked to support “renewable energy sources such as wind, solar and biomass to reach the green energy targets”. However, current designs of energy production are not green but destructive to lands and waters. What does it take to make Sámi voices turned into policies and actions, and to invest in non-harmful technical design?

Combining water resource management and Sámi traditional relationships with nature and waters for sustainable futures. This presentation investigates consequences from a century of exploitation of a river in Sápmi and proposes new relationships building on the respect paid and care for nature within Indigenous Sámi culture.

Inspired by the success of the river Whanganui, Aotearoa, recently granted status as a legal person after a century long struggle by Maori groups we ask: What are the prospects of achieving the same rights for a river in Sápmi? Could the discipline of water resource management collaborating with traditional Sámi knowledge and culture be of support?

The presentation builds on historical maps of the river catchment area, compared with the present situation using GIS, as well as supradisciplinary exchanges with local Sámi and participatory observations along rivers in Sápmi since 2010. A century of Swedish state promoted hydropower design, ignoring Sámi cultural traditions, food and human security as well as animals, birds, fish, and water itself, has resulted in long stretches of dry riverbeds and inundated villages. Dams block the passages for migratory fish. Regulations turns the river unsafe to navigate in summer and the ice treacherous in winter. Other uncaring industrial ventures such as extensive logging of old forest and subsequent ground preparation increase soil erosion and the risk of flooding affect water quality and quantity while large scale mining results in discharge of toxic metals. With the growing calls for environmental justice within the climate change movements it is important to highlight learn from Sámi traditional culture and proposed how it may be turned into practice.

Erica Violet Lee: “Wīhkohkē: Urban Indigenous Resistance from the Past into the Future”

Indigenous peoples have been fighting for land and life against colonialism all over the world since half a millennia. In Canada, currently the Wet’suwet’en resistance movement is set to protect lands and waters against destructive extractive industry, which are allowed and supported by colonial state laws, and law enforcement.

But what is law? From an indigenous standpoint, love and law are one and the same.

Disrupting the notion of “ceded and surrendered” lands and based on a methodology of urban Indigenous lifeways and survivance, and with the ongoing Wet’suwet’en resistance as one of many examples I will discuss what it means – in practice – to refuse consent for extractive projects on our lands. And to promote laws that are tied to love.
This refusal is tied to our freedom of movement and our agency as Indigenous women, girls, Two-Spirit and LGBTQ people on the frontlines of movements in North America and across the world.

Guided by frameworks of decolonial love and the resurgence of Indigenous law, language, and ceremony that have never fully been eliminated despite genocides, we embrace the experience of joy as an embodied treaty and a living act of sovereignty.

Based on my work of Wastelands theory (“In Defense of the Wastelands: A Survival Guide”, 2016), I argue that Indigenous presence and futurisms pose a necessary challenge to the notion that we are primitive or extinct people, as we shape and create the sacred and ceremonial through our movements on the land. At the end of this world, we work toward a universe of beautiful livelihoods for Indigenous communities, free from state oppression and coercion.

Biography
Erica Violet Lee is a Plains Cree writer and community organizer from Saskatoon, Canada. A feminist scholar of prairie Indigenous studies and Nēhiyaw philosophy, her work focuses on the intersections between social movements and bodily sovereignty. She is currently a master’s student at OISE, the University of Toronto, writing about urban Indigenous resistance and joy. Lee blogs at MoontimeWarrior.com and tweets @EricaVioletLee.